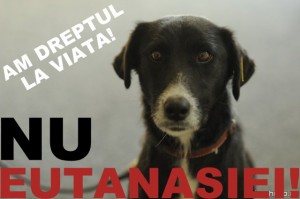 As you all may know, Romania is a country of violence and indifference. Stray dogs have been killed for over ten years by our authorities for nothing and in the worst ways possible: they have been electrocuted, burned alive, poisoned, shot, clubbed to death, beheaded, injected with gasoline and lime in their hearts and lungs, they have been abandoned in woods and deserted wells to starve to death, throne from buildings and bridges, hanged, run over by cars, throne in hot pitch, drowned. Despite of  this unimaginable ordeal, Romanian streets are filled with strays.

Romanian and foreign organizations understood the importance of sterilization, as the only efficient and humane way of dealing with the huge number of strays in Romania (the capital only has over 50.000 stray dogs). Organizations from Italy, Austria, Great Britain, America, Germany sterilized, over the years, thousands of strays, for free. All we needed, was a firm legislation that forces everyone to sterilize and to stop abandoning their dogs on the streets. We have been waiting for 20 years for this law and now, in the year 2011, we go back to the Dark Ages and kill all strays. The politicians incompetence, greed and thirst for blood will be satisfied, dogs will suffer in vain unthinkable torture and our streets will be as full as ever. All this, because Romanian authorities have in mind only their well-being; because stray dogs are a profitable business, from which they can profit with both money and public image.

Please, keep in mind that the word “euthanasia”  means:  “Animal euthanasia (from the Greek meaning „good death”) is the act of putting to death painlessly or allowing to die, as by withholding extreme medical measures, an animal suffering from an incurable, esp. a painful, disease or condition. Euthanasia methods are designed to cause minimal pain and distress. Euthanasia is distinct from animal slaughter and pest control, which are performed for purposes other than an act of mercy, although in some cases the killing procedure is the same”. (Wikipedia) Romania knows nothing of “minimal pain and distress”. From the moment in which they are captured, stray dogs endure tremendous terror, brutality, violence, pain, fear. We can no longer be called humans if we allow these terrible actions to take place. We can’t raise our children as blood thirsty murderers who  learn that it’s okay to kill innocent   animals.

The Romanian mass-media is an important part of this tragedy. Instead of being the impartial observer, “the watch dog of democracy”, most of Romanian televisions and news papers choose to instigate the public opinion  towards violence and extermination of strays. Their implication on this matter goes as far as showing the grave danger that dogs represent for people. They offer no support to animal rescue organizations, they ignore our protests, shutting us up completely .

Romanian politicians forget that their country is a member of the EU and thus, they have to act accordingly. The World’s Health Organization has recommended us the “Catch, Sterilize and Return” program, yet, the politicians choose to abuse these innocent animals, because they don’t have a voice.

This is a cry for help for Romanian strays and people. Please save them from excruciating deaths and us from watching helpless this tragedy. Help our children to be raised in a country that respects and apply moral values like:  responsibility, compassion, non-violence, tolerance of all forms of life! Tell our politicians that world can’t tolerate extreme animal cruelty! Be their voice end help us put an end to their endless suffering!